European Association for the Philosophy of Sport

There were no matters arising

The president talked about the previous EAPS meetings held in Nancy and Sunderland.

The Association currently has a positive balance of €498.81.  Fees from Nancy have not yet been received. Bernard Andrieu sent an email asking for the details of EAPS bank account to make a bank transfer shortly.

Ivo Jirasek and Emanuel Hurych presented the 5th Czech Philosophy of Sport Conference that will take place at the Faculty of Physical Culture in Olomouc, on October 13th-14th. To invite all EAPS members, Lopez Frias posted the call for papers on the EAPS website: http://philosophyofsport.eu/5th-czech-philosophy-of-sport-conference/

The president raised the possibility of taking advantage of some academic event every year to put together a philosophy of sport panel with members of EAPS. Jose Luis Perez Triviño offered the possibility of hosting the event in 2018 in Barcelona during the celebration of the annual conference on Sport Governance organized by the Spanish Association for the Philosophy of Sport and the Pompeu Fabra University.

The possibility of re-organizing the website in a different way was brought up by Ivo and Emanuel. They said that the news section should make clearer the types of events that we are advertising, for example, by splitting it into subcategories like “call for papers,” “conferences,” and “workshops.” Lopez Frias agreed with them on the need to make some changes on the website and encouraged all the participants, as well as all EAPS members, to send him all the information they have about academic events related to the philosophy of sport in Europe.

Fair Play. Special Issue:  Colin Kaepernick. Is He a Moral Entrepreneur? On the Role Athletes Play in the Public Sphere

Fair Play. Journal of Philosophy, Ethics and Sports Law is an electronic journal devoted to the analysis of sport from the point of view of the philosophy, ethics and the theoretical-legal perspective. Besides the philosophical concern, the journal will accept works coming from the legal field given the obvious connections that arise in many occasions with philosophical issues. The journal is directed mainly to researchers, professional and advanced students. It has a biannual periodicity, and his issues will be published in April and October.

Journal of the Latin Association for the Philosophy of Sport (ALFiD). Indexed in DOAJ and CiteFactor.

At the beginning of a pre-season match between San Francisco 49ers and Green Bay Packers, Colin Kaepernick, quarterback of the team from San Francisco, decided not to stand for the flag during the pre-match event, where both the national anthem and flag are honored by the participants in the athletic event. Kaepernick’s decision was motivated by several cases of police violence against members of the Afro-American community occurred some days before the match. To emphasize and call attention to an unfair situation that outraged him, Kaepernick kneeled during the national anthem. To justify his action, he said: “I am not going to stand up to show pride in a flag for a country that oppresses black people and people of color. To me, this is bigger than football and it would be selfish on my part to look the other way. There are bodies in the street and people getting paid leave and getting away with murder.”

Colin Kaepernick’s act of protest resembles those of other black athletes like Tommy Smith and John Carlos and Mohammed Ali. All of them attempted to raise critical awareness on the racism in American society, but at the same time, other interesting philosophical questions emerged. One such philosophical question is the role athletes play in the public sphere given that they are admired and celebrated public figures. Such a question is at the core of the debate on whether or not athletes are role models. A debate that ties with broader questions like the relationship between politics and sports, and the value and status of sport in society.

Fair Play aims to publish a special issue around Colin Kaepernick’s act of protest that discusses some of the issues mentioned above. In doing so, the editors of such a special issue would like to invite all those who want to participate in the issue to submit a work related to the Kaepernick case. Some of the topics to address are the following:

The moral and social responsibility of athletes

You are cordially invited to the 5th Czech Philosophy of Sport Conference which will take place at the Faculty of Physical Culture in Olomouc, on October 13th-14th, 2016, under the auspices of the Philosophy of Sport Section of the Czech Kinanthropological Society (PSS/CKS), together with the European Association for the Philosophy of Sport. We invite colleagues from PSS/CKS, BPSA, EAPS, IAPS to participate. If you intend to attend, please let us know: alexandra.zenata@gmail.com

The second edition of the Sport and Global Governance Conference, will take place on May 5th and 6th at the Pompeu Fabra University Ciutadella’s Campus.

The Conference is organized by the Philosophy of Law Area of UPF and with the collaboration of Board of Trustees and the Department of Law of UPF, the Asociación Española de Filosofía del Deporte and the COPLEFC [Col·legi de Llicenciats en Educació Física i Ciències de l’Activitat Física i de l’Esport de Catalunya], will take place on May 5th and 6th at the Pompeu Fabra University Ciutadella’s Campus.

It is open to all students, professors and professionals who are interested in analyzing the ethical, philosophical, legal and/or moral problems of Sports.

It is a two days Conference in which there will be three keynotes and a workshop given by recognized professionals and professors on the main theme of the Conference. In addition there will be several panels where the selected papers will be presented.

The members of the Slovenian Association for Philosophy of Sport are excited to announce the launch of their website and Facebook Page. 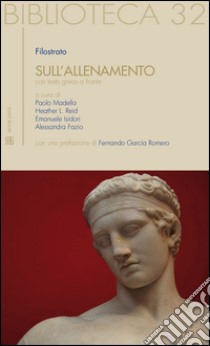 This is a new Italian translation of Philostratus’ 3rd century CE essay on athletic training, On Gymnastics (Peri Gymnastike) with introductions and commentary aimed at scholars of sport history, philosophy, and pedagogy.  Paolo Madella’s translation includes introductory notes and extensive footnotes that take into account recent scholarship as well as ancient context.  Heather L. Reid provides a philosophical-historical introduction to the text (here attached in English translation: Introduction to Philostratus Gymnasticus), Emanuele Isidori and Alessandra Fazio offer a practical pedagogical interpretation of the text, and Fernando Garcia Romero opens the discussion with a preface that situates the text within the ancient and modern literature on sport.  This is a new look aimed at modern sport scholars at the most complete text we have on ancient sport.

European Association for the Philosophy of Sport

1. Minutes of previous meetings at Nancy and Prague were signed as a true record.

There were no matters arising

3.1.1  The president reported on the development of the website, and commended Francisco Javier López Frías on his work.  The website is an excellent compendium for news of forthcoming events, in both English and Spanish.

It is hoped that the website can be further developed, following discussions in Prague, not least by providing space for the submission of work in progress papers.  Members were encouraged to submit papers, and to encourage colleagues and especially students to do likewise.  Papers can be in any European language (although an English abstract would be appreciated).  A link can be made to Google Translate in order to provide rough and ready translations.

3.1.2 Proposals to hold a meeting in association with ECSS 20015 at Malmo were unsuccessful.  The ECSS conferences are thought to be too expensive to attach many EAPS members.

The ECSS 2016 conference will be held in Vienna.  The present agreed to contact the organisers, to see if a one-day themed conference could be held in association with the ECSS conference.  EAPS members would be able to attend this satellite conference without having to register for the main ECSS conference.  ECSS delegates would have free access to the EAPS event.  A suggested theme for the EAPS event was sport and the outdoors (with an invitation between extended to Ivo Jirásek and his team to lead on this).  The additional theme of women and sport was proposed by Sylvia Camporesi.

The Association currently has a positive balance of €498.81.  Fees from Nancy have not yet been received, and the treasurer is pursuing this matter.

An offer to host the 2017 conference in Nijmegen, the Netherlands, was accepted.

It was noted that attendance at BPSA/EAPS conferences may be affected by the location of IAPS.  IAPS will be in Greece in 2016 so is unlikely to be in Europe in 2017.

RECERCA is a bianual journal published by the Department of Philosophy and Sociology (Universitat Jaume I de Castellón). Since 2012, Recerca has used the OJS for its blind peer review process: http://www.e-revistes.uji.es/index.php/reserca.  RECERCA is indexed in Humanities Source Publications, Fuente Académica Premier, Philosopher’s Index, IEDCYT (category B) and Latindex.

Find the call for papers here

The webstite of the First Meeting on Sport and Governance is already opened. Find it here:

The conference will be held May 4-5 in Barcelona, sponsored by the Philosphy of Law Department of the University Pompeu Fabra.

Confirmed keynote speakers include the president of the International Association of Philosophy of Sports, a deputy of the Administrative Court of Sports and a member of the Group of Experts from the European Commission (Doping).

The call for papers for the European College of Sport Science (ECSS) conference is now open.